Liz here.  I was actually involved in the business of engagements long before I became Mom and Dad’s (yes, that would be Marisa and Douglas) faithful minion.   One of my (and my husbands) earliest photography jobs was an engagement shoot.  I don’t mean the posed, smiling “we just got engaged, look at my ring” photos…that would have been too easy!  Our challenge was to literally stalk a couple on their journey through central park taking photos without the fiancée-to-be knowing.

This involved a lot of sneaking around, pretending to look casual, and of course, hiding in the bushes.  After shooting/stalking them in the lower end of Central Park (Tavern on the Green, Bethesda Fountain, etc), we had to hop in a taxi behind theirs and head uptown to the Conservatory Garden for the actual proposal.  I can’t deny it was fun to rush into the taxi and dramatically yell, “follow that cab!”

Upon arrival, we split up to catch different angles of the proposal.  There was an awkward moment when fiancée-to-be caught a glimpse of me trying to casually lounge on a bench.  What?  No, that wasn’t me skulking around you in a completely different area of town less than 30 minutes ago, what are you talking about?  I did get a weird look from her, but luckily it passed quickly. 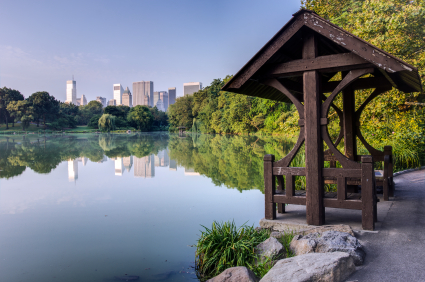 Onto the proposal!  There I was, at a perfect angle as the gentleman got down on one knee.  Of course a giant family group had to pick that moment to pass right next to me and yell, “OH MY GOD IS HE PROPOSING???” and burst into ear-shattering cheers. I managed to click the shutter a few times before diving down into the bushes, scratching my arms on the way down.  Lousy thorns!

Overall that day was a lot of fun despite the blisters, sunburn, and scratches.  Sadly, I no longer have the images from that day.  It was exciting immortalize such a special time in a couple’s life on film.   I also learned that the CIA would probably not be recruiting me any time soon…

Have you ever witnessed a public proposal?

Welcome to our blog!

This chic SoHo spot is the stop for all your diamond desires. Come meet this husband-wife team for what NYMag called "the best micro pave around" {154 Prince Street, NYC, marisaperry.com}